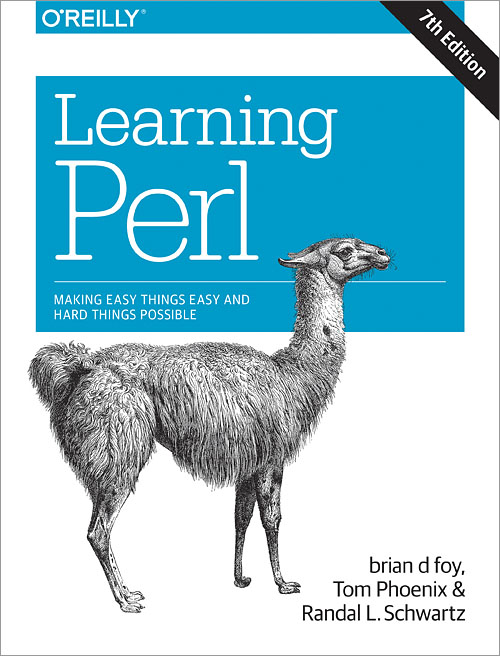 The 7th edition of Learning Perl is due to be released later this month. I was one of the technical reviewers of the book - I hadn’t read it since the 3rd edition where it was a course text at my University (and Perl was described as a “text processing language”!). Reviewing the book, I was struck by how much detail it contained. If you’re looking for a thorough introduction to Perl, it’s a great place to start. I picked up (or re-learned) a few tricks along the way, that I thought were worth sharing.

You probably know that Perl supports a bunch of file test operators that do useful things like check if a file exists, if it’s readable and so on:

But did you know that since version 5.10, you can stack file test operators?

This way is cleaner and shorter. Oh and bonus! file test operators work on filehandles too. Stacked file operators are not part of the feature pragma, so an explicit use 5.10.0; is not required, although if your code is going to be shared, you should probably include it.

Learning Perl has a lot of anecdotes about Perl history in it. You might have used the glob function before:

This returns all file names ending in .json in the current working directory. Glob takes a string of patterns separated by whitespace, so you can provide multiple patterns:

Instead of using the word glob you can use angle brackets:

These angle brackets treat the text between them like a double-quoted string. One thing I learned was that ancient versions of Perl (pre 5.6) simply called /bin/csh every time they encountered glob! This made globbing slow, and directory handles were preferred over glob.

In many C-based languages you can write numbers in hexadecimal and octal notation, and you can in Perl too:

In Perl though, you can also write binary numbers inline, with the prefix 0b:

This can make it easier to work with binary data; instead of using hexadecimal notation and doing the mental arithmetic to calculate values, you can write binary data inline. For example, let’s say you are reviewing some code:

To understand this example in hexadecimal, you have to calculate that 4 * 16 = 64, and then either just know, or convert that number to binary to find out that the 7th bit is flipped, and understand that this is testing whether $bit_array has that bit flipped too. Here’s the same code with inline binary:

In this example, you can just see that the 7th bit is flipped, and the intent of the if statement becomes obvious. If you’re interested in understanding bit arrays and bitwise operators, I recently wrote an introduction to them.

4. Check an installed module is up to date

These days we have so many advanced Perl package installers like cpanm and cpm it’s easy to forget that the basic CPAN client can do a lot too. For instance, the -D option checks the installed version of a module and compares it to the latest version on CPAN. So to check if the Test::More module is up to date, at the terminal I can enter:

Woah, mine is pretty out of date. I should upgrade …

5. Avoiding the shell for system commands

The Perl built-in functions exec and system may invoke the shell when running a system command. Generally you want to avoid this as invoking the shell is slower than executing the command directly. Perl looks at the first argument passed to exec or system and if it contains shell metacharacters invokes the shell.

So let’s say you need to invoke a system command, and you’re not sure whether the command arguments will contain metacharacters or not. If they do, the shell will be invoked and any metacharacters will be interpolated. One way to avoid the shell interpolating metacharacters is to escape them. But shell escape sequences are rarely simple (e.g. escaping a single quote). Learning Perl shows a better way: passing a list.

This will never invoke the shell, and avoid metacharacter interpolation.

Learning Perl 7th Edition has nearly 400 pages describing the Perl syntax, and how to accomplish important tasks like file IO, process management and module installations. It’s available for pre-order now on Amazon (that’s an affiliate link for brian d foy, the author of this edition). You can also get it from the publisher, O’Reilly. Check out the book’s offical website where brian has been blogging about the new edition.