Save space with bit arrays 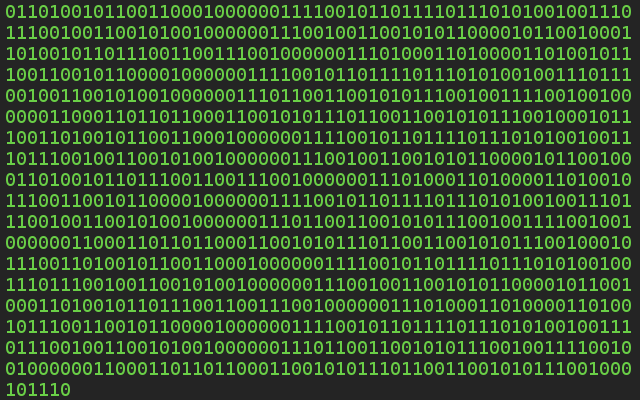 “Big data” is an overused term, but when you’re actually working with big data, every bit can count. Shaving several bits from data structure used billions of times can save a lot of space. A few months ago I was working on a job distribution system; it would send millions of jobs out every day. We wanted to capture every decision made by the system, so that a user could later query the system to understand why a job had or hadn’t been sent to a partner.

The problem was that the system was making billions of decisions a day, so we needed a way to pack those decisions as efficiently as possible. A colleague of mine had the bright idea to use a bit array, and it worked very well - we were able to compress the data by a factor of 18 or more. If you’re not familiar with bit arrays, or a little rusty on the code, keep reading and I’ll show you how to use them with Perl.

Bit arrays are a way of storing multiple booleans in single number. Consider the number 0 as a byte/octet represented as bits:

Instead of treating it like a number, using bitwise operators we can treat each bit as a separate column. As this is an 8 bit number, we can store up to 8 booleans in it:

To store a boolean in the first bit of the array, we can use bitwise or equals (|=). Here’s how that looks in C pseudocode:

Let’s take this one step at a time. First I initialize an 8 bit integer called bit_array. Next, I create a binary number with the bit set that I wish to set in bit_array. I do this with the left bitshift code 1 << 6. This means, “shift the bits in the number on the left, 6 places to the left”, which does this:

This is called a bitmask. Next I use or equals to update bit_array with the bitmask 01000000. Bitwise or (|) works by setting any bit to 1 in its left operand that is set to 1 in its right operand. Adding a equals sign on the end simply assigns the resulting value to bit_array.

If we wanted to store a boolean in the fourth bit, we’d do this:

To test if a particular bit is set, I can use bitwise and (&):

Bitwise and returns a number with every bit set to 0 in its left operand which is 0 in its right operand. So the code 1 << 6 bitshifts a number that only has one particular bit set to 1 (01000000). This is the bitmask. If the bit array has that bit set to 1, it will return non-zero (true), else it returns zero (false).

I’m going to use a contrived example to show how bit arrays work in Perl. Imagine we’re working on an ordering system at a pizza restaurant. We need to store all the toppings required for the pizza. In Perl we store numbers in scalars, which are usually 32 or 64 bits long; that’s a lot of toppings we can pack into a single number!

Here is the class:

I create a class called Pizza::Order. The %toppings hash stores names of pizza toppings and their associated bitmask. I could only think of 14 toppings, leaving 18 spare slots for the future (if we want to stick to 32 bit integers). The new subroutine is a constructor which creates a blessed scalar as the Pizza::Order object.

The print_state method uses printf to print the Pizza::Order object state as a binary number. This is a really useful feature of printf which many other languages don’t have (C & Python for example). Both add_topping and get_toppings use the techniques described earlier to set and check for set bits.

More interesting perhaps, is the remove_topping method. This uses bitwise not (~) to invert a bitmask and then bitwise and (&) equals to unset it. Pretty nifty, huh? Here’s a quick script to test it:

The first line is the current state of the $order object. It shows the first, and second-to-last bits set, which correspond to the tomato and eggplant bitmasks. It then prints out those toppings. Yay, it works!

One thing to watch out for when storing bit arrays on disk is code change. Imagine if I had several years’ worth of pizza orders saved in a database. Then one day, we stopped offering bbq chicken. It would be tempting to update the toppings hash like this:

I deleted the bbq_chicken entry and bumped up the remaining toppings bitmasks. The problem is compatibility: in all the historical pizza orders, olives (for example) had a bitmask of 00000010000000 but in the new code, its bitmask is one lower. So if I tried to load a historical order with this class, the toppings data would be wrong. One way to handle this is remove, but not reuse, the bitmask for the deleted entry.

Another thing to consider is upper limits (update - see using bit arrays with large integers). If you want your Perl code to be compatible with 32 bit and 64 bit Perls, you should probably stick to a maximum of 32 bitmasks (using a module like bigint may not work because of addressable memory limitations). You can see the settings your Perl has been compiled with by typing perl -V | grep longsize at the command line. The longsize value is the number of bytes your Perl can store in an integer natively.

Finally, in order to get the data back out of a bit array it needs to be tested with all the available bitmasks. Consider the get_toppings method in Pizza::Order. To find out what toppings are set, the code has to check every topping’s bitmask. This is pretty inefficient. So bitmasks are good for compact data storage, but not fast access.