Don't Be Afraid to Drop the SOAP

SOAP has great hype; portable, simple, efficient, flexible, and open, SOAP has it all. According to many intelligent people, writing a web service with SOAP should be a snap, and the results will speak for themselves. So they do, although what they have to say isn’t pretty.

Two years ago I added a SOAP interface to the Bricolage open source content management system. I had high expectations. SOAP would give me a flexible and efficient control system, one that would be easy to develop and simple to debug. What’s more, I’d be out on the leading edge of cool XML tech.

Unfortunately the results haven’t lived up to my hopes. The end result is fragile and a real resource hog. In this article I’ll explore what went wrong and why.

Last year, I led the development of a new content-management system called Krang, and I cut SOAP out of the mix. Instead, I created a custom XML file-format based on TAR. Performance is up, development costs are down, and debugging is a breeze. I’ll describe this system in detail at the end of the article.

When I joined the Bricolage project, it lacked a good way to control the application aside from the browser-based GUI. In particular, we needed a way to import data and trigger publish runs. Bricolage is a network application, and some useful tasks require interaction with multiple Bricolage servers. SOAP seemed like an obvious choice. I read “Programming Web Services with Perl” and I was ready to go.

I implemented the Bricolage SOAP interface as a set of classes that map SOAP requests to method calls on the underlying objects, with some glue code to handle XML serialization and deserialization. I used XML Schema to describe an XML vocabulary for each object type, which we used to validate input and output for the SOAP methods during testing.

By far the most important use-case for this new system was data import. Many of our customers were already using content management systems (CMSs) and we needed to move their data into Bricolage. A typical migration involved processing a database dump from the client’s old system and producing XML files to load in Bricolage via SOAP requests.

The SOAP interface could also move content from one system to another, most commonly when moving completed template changes into production. Finally, SOAP helped to automate publish runs and other system maintenance tasks.

To provide a user interface to the SOAP system, I wrote a command-line client called bric_soap. The bric_soap script is a sort of Swiss Army knife for the Bricolage SOAP interface; it can call any available method and pipe the results from command to command. For example, to find and export all the story objects with the word foo in their title:

Later we wrote several single-purpose SOAP clients, including bric_republish for republishing stories and bric_dev_sync for moving templates and elements between systems.

When I started development on Krang, our new content management system, I wanted to find a better way to meet our data import and automation needs. After searching in vain for better SOAP techniques, I realized that the problems were largely inherent in SOAP itself. SOAP is a network system, tuned for small messages and it carries with it complexity that resists easy debugging.

On the other hand, when I considered the XML aspects of the Bricolage system, I found little to dislike. XML is easy to understand and is sufficiently flexible to represent all the data handled by the system. In particular, I wanted to reuse my hard-won XML Schema writing skills, although I knew that I’d need runtime validation.

In designing the new system I took a big step back from the leading edge. I based the new system on the TAR archive file format, which dates back to the mid-70s! 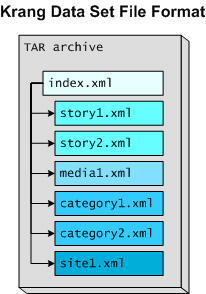 I named the file format “Krang Data Set” (KDS). A KDS file is a TAR archive containing a set of XML files. A special file, index.xml, contains data about all the files contained in the KDS file, providing class names and IDs. To reduce their size, it’s possible to compress KDS files using gzip.

I wrote two scripts, krang_import and krang_export, to read and write KDS files. Each object type has its own XML Schema document describing its structure. Krang classes implement their own deserialize_xml() and serialize_xml() methods. For example, to export all templates into a file called templates.kds:

To import those templates, possibly on a different machine:

If the object being exported has any dependencies, the KDS file will include them. In this way a KDS file generated by krang_export is guaranteed to import successfully.

By using a disk-based system for importing and exporting data I cut the network completely out of the picture. This alone accomplishes a major reduction in complexity and a sizable performance increase. Recently we completed a very large import into Krang comprising 12,000 stories and 160,000 images. This took around 4 hours to complete, which may seem like a long time but it’s a big improvement over the 28 hours the same import required using SOAP and Bricolage!

For system automation such as running publish jobs from cron, I decided to code utilities directly to Krang’s Perl API. This means these tools must run on the target machine, but in practice this is usually how people used the Bricolage tools. When an operation must run across multiple machines, perhaps when moving templates from beta to production, the administrator simply uses scp to transfer the KDS files.

I also took the opportunity to write XML::Validator::Schema, a pure-Perl XML Schema validator. It’s far from complete, but it supports all the schema constructs I needed for Krang. This allows Krang to perform runtime schema validation on KDS files.

SOAP isn’t a bad technology, but it does have limits. My experience developing a SOAP interface for Bricolage taught me some important lessons that I’ve tried to apply to Krang. So far the experiment is a success, but Krang is young and problems may take time to appear.

Does this mean you shouldn’t use SOAP for your next project? Not necessarily. It does mean that you should take a close look at your requirements and consider whether an alternative implementation would help you avoid some of the pitfalls I’ve described.

The best candidates for SOAP applications are lightweight network applications without significant performance requirements. If your application doesn’t absolutely require network interaction, or if it will deal with large amounts of data then you should avoid SOAP. Maybe you can use TAR instead!