In this article, I’ll give an initial introduction to mod_perl, make you want to give it a try and present a few examples of the well-known sites that are powered by mod_perl enabled Apache.

mod_perl is at the heart of the Apache/Perl integration project, which brings together the full power of the Perl programming language and the Apache Web server.

From the outset, Apache was designed so that you can extend it by the addition of ``modules.” Modules can do anything you need to do, such as rewrite HTTP requests, restrict access to certain pages and perform database lookups. Modules are normally written in C, which can be hard work. mod_perl is a module that allows you to do all of these things, and more, by using Perl – making the development much quicker than C. Apache is the most popular Web server on the Internet and mod_perl is one of the most popular modules for extending it.

Why Is mod_perl So Popular?

If you love Perl and your favorite Web server is Apache, then you will love mod_perl at first sight. Once you try it in action, you will never look back – you will find mod_perl has everything you need. But even if you do find that there is something missing, then just speak up. Before you can count to three, someone will have made it for you. Which, of course, will make you want to give something in return. Eventually you will contribute something on your own, and that will save time for a huge mod_perl community so that they can create even more things for others to use.

With mod_perl it is possible to write Apache modules entirely in Perl. This allows you to easily do things that are more difficult or impossible in regular CGI programs, such as running sub-requests, writing your authentication and logging handlers.

The primary advantages of mod_perl are power and speed. You have full access to the inner workings of the Web server and you can intervene at any stage of HTTP request processing. This allows for customized processing of the various phases; for example, URI to filename translation, authorization, response generation and logging.

There are big savings in startup and compilation times. Having the Perl interpreter embedded in the server saves the very considerable overhead of starting an external interpreter for any HTTP request that needs to run Perl code. At least as important is code caching: the modules and scripts are loaded and compiled only once, when the server is first started. Then for the rest of the server’s life the scripts are served from the cache, so the server only has to run the pre-compiled code. In many cases, this is as fast as running compiled C programs.

There is little run-time overhead. In particular, under mod_perl, there is no need to start a separate process per request, as is often done with other Web-server extensions. The most wide-spread such extension mechanism, the Common Gateway Interface (CGI), is replaced entirely with Perl code that handles the response generation phase of request processing. Bundled with mod_perl are two general purpose modules for this purpose: Apache::Registry, which can transparently run existing unmodified Perl CGI scripts and Apache::PerlRun, which does a similar job but allows you to run scripts that are to some extent ``dirtier.”

mod_perl allows you to configure your Apache server and handlers in Perl (using the PerlSetVar directive and the <Perl> sections). This makes the administration of servers with many virtual hosts and complex configuration a piece of cake. Hey, you can even define your own configuration directives!

How Fast and Stable Is mod_perl?

Many people ask, ``How much of a performance improvement does mod_perl give?” Well, it all depends on what you are doing with mod_perl – and possibly whom you ask. Developers report speed boosts from 200 percent to 2,000 percent. The best way to measure is to try it and see for yourself! (see mod_perl Articles in Printed and Online media and Success Stories for the facts).

Every second of every day, thousands of Web sites all over the world are using mod_perl to serve hundreds of thousands of Web pages. Apache and mod_perl are some of the best-tested programs ever written. Of course, they are continually being developed and improved, but you do not have to work on the ``bleeding edge” of development – you can use the stable products for your sites and let others do the testing of the new versions for you.

I want to show you just a few of the many busy and popular sites that are driven by mod_perl. A thousand words can’t substitute the experience. Visit the sites and feel the difference. They will persuade you that mod_perl rules!

How Many Sites Are Running a mod_perl Enabled Apache Web Server?

According to Netcraft ( http://netcraft.com ), as of August 2001 - 18 million hosts are running the free Apache Web server, which is about 60 percent of all checked in survey hosts!

Here is the graph of “Server Share in Internet Web Sites.” What about mod_perl? https://web.archive.org/web/20020206221356/http://perl.apache.org/netcraft/ reports that sites running mod_perl account for 2,823,060 host names and 283,180 unique IP addresses. This is actually an underestimate, since when hosts are scanned for running Web servers only well-known ports are checked (80, 81, 8080 and a few others). If a server runs on unusual port, then it does not enter the count unless the owner has manually added it to the Netcraft database. Here is a graph of the growth in mod_perl usage: 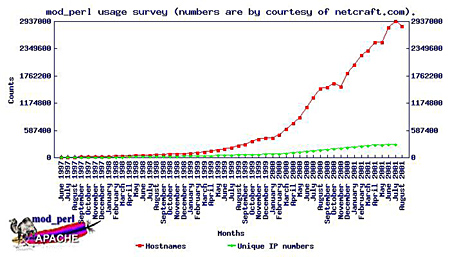 You probably are excited about the release of Apache 2.0, the next generation of the best Web server. The major new features of this new generation of the Web server are threaded processes, which should make the server more scalable, and, of course, the very-welcomed filtering layer.

You probably are not less excited about the recent release of Perl 5.6, whose main new feature is (almost) stable support for threads, something that existed in the previous Perl version but which was quite shaky.

What has all this to do with mod_perl you ask? mod_perl 2.0 is being developed at this very moment and will benefit enormously from the new Apache and Perl features. The most important improvement will be a reduced process size – a parsed Perl opcodes tree will be almost completely shared between threads of the same process.

Do you believe in coincidences? Both Perl 5.6 and Apache 2.0 were released in the same week in March 2000. Looks very suspicious to me. If you get the obvious conspiracy uncovered, then please let me know.

Of course, there are lots of bumps ahead of us. It will take time before all our applications will be able to benefit from the threading features. The main reason lies in fact that most of the Perl modules available from CPAN aren’t thread safe. But you shouldn’t despair. You can turn off threads for Perl code that is not thread safe or that uses modules that aren’t thread safe.

I Want mod_perl Now, Where Do I Get It?

mod_perl’s home is http://perl.apache.org. From the site you will be able to download the latest mod_perl software and various documentation; find commercial products and free third-party modules; read the success stories; and learn more about mod_perl.

It’s quite important to get yourself subscribed to the mod_perl list. If you want know what happens with mod_perl, if you want to know what new features are being developed, if you want to influence and contribute or if you simply want to get help, then you don’t want to skip this mailing list. To subscribe to the list send an empty e-mail to modperl-subscribe@apache.org .

Are There Any mod_perl Books and Documentation?

Lincoln Stein and Doug MacEachern wrote Writing Apache Modules with Perl and C . It can be purchased online from O’Reilly and Amazon.com. You will find a vast list of mod_perl documentation on the mod_perl home page: http://perl.apache.org/ .

I Love mod_perl, I Want to Know Who Wrote This Great Free Product!

But as you know in a big community, there are always people who love to help, and there is a bunch of developers from all around the world who patch mod_perl, develop entire Perl modules for it, debug the server and advocate it. I’m afraid the list of contributing developers is too long to include here. But you are welcome to join the mod_perl mailing list and see all these folks in action. I promise you, you won’t regret the show, since you are going to learn much more than just about mod_perl. See for yourself.

If you are using mod_perl or planning to use it, then it’s a good idea to subscribe to the users mod_perl mailing list. You should send an empty e-mail to modperl-subscribe@apache.org in order to do that.

If you are interested in helping out with development of mod_perl 2.0, then you are welcome to join us. There are many features that are still need implementing and a lot of testing has to be done. So there is a lot of work if you are knowledgeable developer or even if you just a newbie. And the more help we get the sooner we bring mod_perl 2.0 into production shape. You can subscribe to the developers mailing list by sending an e-mail to dev-subscribe@perl.apache.org.