If you’ve ever had to do user support, then you’ll be familiar with the following scenario: A question comes in from a user, and you write an e-mail reply. However, by the time you’ve hit “send,” another member of your team has already dealt with the problem. Or maybe you’re fortunate enough not to have to support end-users, but you have a terrible time managing the various projects that you’re working on. Or maybe you just can’t remember what you have to do today. How can Perl help here?

Enter Request Tracker. Request Tracker is a free trouble ticketing system written in Perl. It is used widely for everything from bug tracking and customer support to personal project management and to-do lists.

Some of you may be familiar with the first edition of Request Tracker, RT1. RT1 was successful, but internally, it was a bit crufty. RT2 is a complete rewrite designed to be much more capable, flexible and extensible.

So what is it?

On the simplest level, RT tracks requests - tickets - and correspondence about them. If you aren’t already familiar with such systems, consider sending a support request to your ISP. It might go something like this:

This exchange most likely won’t happen all at once, and could happen over the span of several days involving several technicians from your ISP. Each technician will want to know the specifics of what the previous technician told you, and your response. The ISP will also want to know who is handling a particular ticket, how long it’s been open, how many total tickets are open, what category your ticket falls into (“e-mail problems”), etc. This is the problem that RT was built to solve. Some companies use tools such as “Remedy” or “Clarify” for similar purposes, but RT is a free and open-source solution.

RT isn’t only for help-desk situations. The same system can be used to track bugs in software, outstanding action items or any other issue. In this domain, RT overlaps with programs such as Bugzilla and Gnats. In fact, RT’s being used by the Perl 6 developers to track what they need to work on.

RT provides the most natural way of displaying exchanges such as the one in the example above. Every request is displayed as a sequence of transactions, starting with the initial message that created it. A transaction can also represent a change in metadata - for instance, the person who is working on a ticket may change as another member of the team takes over, or the ticket may be re-prioritized; it can change its status to reflect whether it’s new, open, resolved or waiting for more input from the requestor.

Requests live in queues, where a queue provides a loose grouping of both what the ticket is about and who is likely to respond to it. For instance, queries to the Web master of a site could end up in the “web” queue, whereas each development team would have a queue per project they were working on.

There are a bunch of ways to get data into RT. The two most popular are the Web interface and the e-mail interface. You can also have RT automatically insert data from CVS commit logs, via command-line interface or through more specialist tools.

The e-mail interface is easy to use and uses a simple tag in the subject line to determine what to do with a message. This tag will generally look like [site #40] where “site” is a special tag identifying your RT setup and the number (40) is the ticket number. All e-mails sent to RT with that information in the subject will be appended to the appropriate request. Most RT systems are configured so that an e-mail without a recognized tag in the subject line automatically creates a new request. 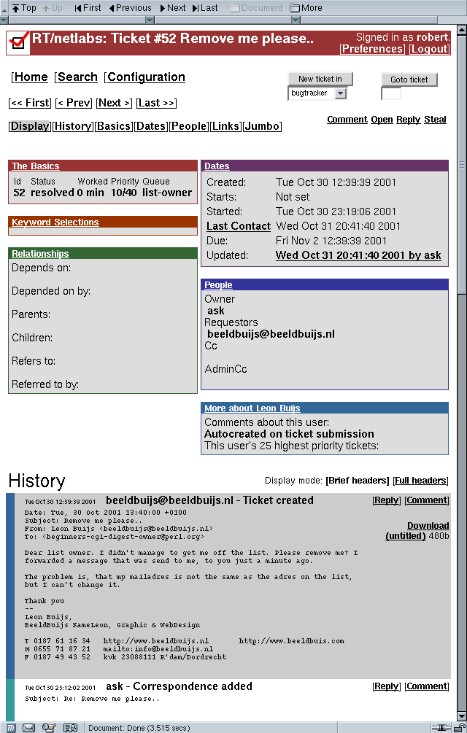 RT stores lots of information about each ticket. By default, it maintains information about the requestor, owner, (the person who’s currently working on the ticket) status, subject, creation date, due date, priority, queue, links to other tickets, as well as the people who are interested in that particular ticket.

This information is important for sorting, categorization and reporting. RT also allows for custom meta-data to be added to a ticket in the form of keywords. Returning to our ISP example, they might configure their RT setup to record the platform and software being used. One reason to do this is so that specialists can be assigned to focus on issues in their areas of specialization. Similarly, you can gather statistics on, say, the number of users reporting problems using Outlook Express.

As configured “out of the box,” RT does not send any e-mail by default. The end user needs to use the Web interface to configure RT’s “scrips.” Scrips are a way of telling RT to trigger certain actions based on when something happens.

For example, one important scrip would be:

This way, your requestor would get an autoresponse telling them that their query was being looked at. Another useful scrip would be: 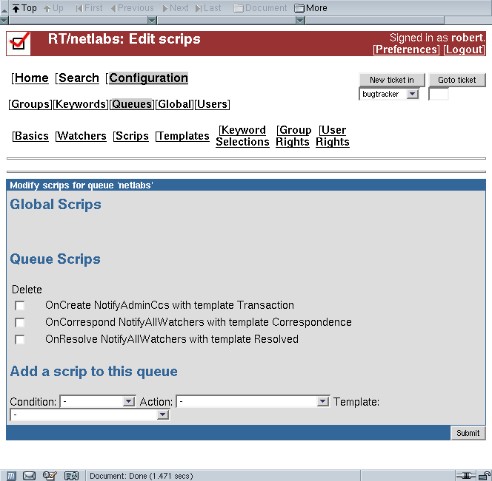 One important aspect of RT is how it differentiates between correspondence and comments. Correspondence is something that is sent by one of the RT users to the requestor, to solicit further information or inform them of developments; comments are normally set up to be internal to RT users, and never sent to the end-user. Think of it as being the support team’s chance to be rude to the end-user behind their back.

RT is smart. When correspondence is e-mailed out to the user, it appears as if the author had written it, but has a tweaked From: line so that replies are also sent back into RT and added to the ticket.

Here is the above ISP example, as it might look as an RT ticket:

RT2 is built upon standard modules that many people use. There isn’t anything esoteric used; in fact, you may already be using many of the modules on which it depends.

But you might think that installing all the dependent modules might be a chore. Again, RT is smart. It comes with a script that uses the CPAN.pm module to retrieve and install the correct versions of everything it needs.

This is probably the hardest part of installing RT. (Assuming you have CPAN.pm configured properly.) You run “make fixdeps,” and it all happens for you. It may be necessary to run it multiple times or install one or two modules by hand, but that’s easy compared to manually installing almost 30 modules.

The most important module is probably DBIx::SearchBuilder. It provides a standard mechanism for persistent object-oriented storage. By using it, RT doesn’t need to worry about the details of the SQL queries to access its database. The details of DBIx::SearchBuilder are beyond the scope of this article - in fact, they’ll be covered in a future perl.com article - but in a nutshell, your classes will subclass the SearchBuilder class, and the module will take care of the persistence for you. SearchBuilder also makes it easy to port RT to your SQL backend of choice; since it’s all done through the DBI, the architecture is completely database-independent.

Ninety-five percent of RT is configured via the Web interface. Once the system is up and running, most changes can be made through the Configuration menu. Everything from adding users to configuring automatic e-mail responses can be done there.

Because the Web interface is created using HTML::Mason, it’s easy to extend RT using the internal API. Whole pages or just individual Mason elements can be easily overridden or updated. Common customizations include specialized reports, user interface tweaks or new authentication systems. Any trouble ticketing system will need adapting to the needs of the local users, and RT makes it easy to do this. The API by which the Mason site accesses the ticketing database is the same thing that all of the interfaces use natively, so it’s possible to completely re-implement any interface from scratch - in fact, you can write your own tools to access the system quickly and easily by using the RT::* modules in your own code.

Currently, I’m using RT for several different projects. Here are a few more details about each RT setup to provide you with more ideas and examples.

There’s a lot more to RT than I’ve covered in this article. Some things I’ve glossed over include:

The current version of RT2 is 2.0.9. The 2.1 development series will be starting soon leading toward 2.2. While nothing has been finalized, items on the table for 2.2 include better ACL support, more flexible keywords, asset trackin, and several other cool things.