The e-smith Server and Gateway: a Perl Case Study

The e-smith server and gateway system is a Linux distribution designed for small to medium enterprises. It’s intended to simplify the process of setting up Internet and file-sharing services and can be administered by a non-technical user with no prior Linux experience.

We chose Perl as the main development language for the e-smith server and gateway because of its widespread popularity (making it easier to recruit developers) and it’s well suited to e-smith’s blend of system administration, templating and Web-application development.

Of course, the system isn’t just Perl. Other parts of the system include the base operating system (based on Red Hat 7.0), a customized installer using Red Hat’s Anaconda (which is written in Python), and a range of applications including mail and Web servers, file sharing, and Web-based e-mail using IMP (which is written in PHP). However, despite the modifications and quick hacks we’ve made in other languages, the bulk of development performed by the e-smith team is in Perl.

Administration of an e-smith server and gateway system is performed primarily via a Web interface called the “e-smith manager.” This is essentially a collection of CGI programs that display system information and allow the administrator to modify it as necessary.

This allows system owners with no previous knowledge of Linux to administer their systems easily without the need to understand the arcana of the command line, text configuration files, and so on. 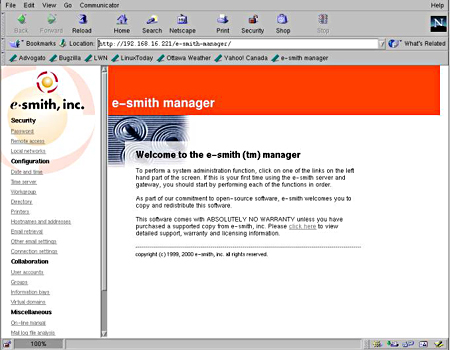 The manager interface is based on the CGI module that comes standard with the Perl distribution. However, a module esmith::cgi has been written to provide further abstractions of common tasks such as:

It is likely that this module will be further extended in the next version to provide more abstract ways of building “wizard” style interfaces, so that developers don’t have to copy and paste huge swathes of code calling the CGI module directly.