Yet Another Perl Conference, also known as YAPC, wasn’t just another conference, it was incredible.

YAPC was thought up and coordinated by Kevin Lenzo of Carnegie Mellon University. The idea was to have a “grass roots” Perl conference that everyone could afford. Kevin made it so affordable—just $60 per person—that nearly 300 people attended.

You may be asking, what kind of conference could someone possibly host for $60 a person? Well, Kevin did such a remarkable job that it will be hard to top it, ever. Not only were there great facilities, AV equipment, and non-stop talks and tutorials, he also managed to feed everyone! Did it stop there? No, Kevin’s Mom even made cookies for the whole gang! By the way, thank you Mrs. Lenzo, the cookies were excellent!!!

To me, YAPC didn’t feel like just another conference. There weren’t thousands of people trying to cram themselves here and there, or fighting over swag. YAPC was almost like a family reunion, it was very cozy. Nearly all of the people who are deeply involved with the development and support of Perl were there. I was even able to sit down with Larry Wall and talk with him over lunch without him being mobbed by a crowd. YAPC was also a place where you could finally put a face with a name/handle. I finally know who abigail is! You will have to come next year to find out for yourself…

Travel seemed to be a little bit of a problem, but of course that wasn’t Kevin’s fault. There were a few cancelled flights and I heard many stories of misdirected luggage. In fact, Larry Wall had to give his opening speech about his home X-10 setup without any of his X-10 props, they were somewhere in Indiana.

Although his X-10 hardware was somewhere else, Larry did have his notebook computers with him and instead of using real X-10 components as props, Larry made us use our imaginations, holding up imaginary X-10 components for us to see. I got the impression that at Larry’s house it can be quite noisy because he has sounds play through the P.A. system for just about every event imaginable.

The talks and tutorials were as good at YAPC as the talks and tutorials at any of the other big-name conferences. I think in many cases they were better because the presenters were not paid for their talks. I felt that this also added to the grass-roots feeling of the conference. The presenters were not doing this for money, they were doing it for their love of the Perl language and to benefit the Perl community.

Their were talks and tutorials on topics including learning Perl, the history of Perl, Perl and XML, using CGI.pm and infobots.

Jon Orwant gave a presentation called Rebuilding Post-Apocalyptic Civilization with Perl. Jon is an excellent speaker and his presentation was hilarious. His conclusion: When the apocalypse is over, the Perl programmers survive—of course.

One of the more crowded talks was by Dick Hardt of ActiveState. There has been a lot of buzz because Microsoft recently announced that they were funding Perl development for Windows through ActiveState. Some people immediately thought that this was a bad thing and that Microsoft would somehow “taint” Perl (pun intended). According to Dick, this is not the case. As he pointed out, this is not the first time that Microsoft has funded Perl development. Microsoft has been funding Perl development through ActiveState since 1995. He assured the audience that Perl will still be openly developed and would not have a bunch of proprietary features thrown in. Dick also pointed out that Perl no longer has separate source trees for Windows and Unix. Because of this single source-tree, the ActiveState/Microsoft agreement will benefit the entire Perl community by providing outside money to fund the continual development of Perl, he said.

The Perl Mongers were out in full force at YAPC. YAPC was a great way to get in touch, in person, with many of the Perl Monger group leaders. brian d foy, the founder of The Perl Mongers was there working as many deals as he could with others in the Perl industry. It amazes me how much business gets done in side conversations between sessions. There was also a talk on Effective Perl Mongering given by Adam Turoff. Adam’s talk was designed to help others with their Perl Monger groups and advocacy.

Elaine Ashton presented us with The Timeline of Perl and its Culture. Not only was this a great talk, but Elaine has created the guide to Perl history by researching and summarizing Perl from the beginning. I truly hope that at next year’s YAPC, Elaine will present her talk again, but in a larger time-slot. She had 45 minutes for the presentation, but really needed about twice that long to present all of the information.

YAPC also gave many of the #perl IRC regulars a chance to meet face-to-face. We even went out and took a #perl family picture: 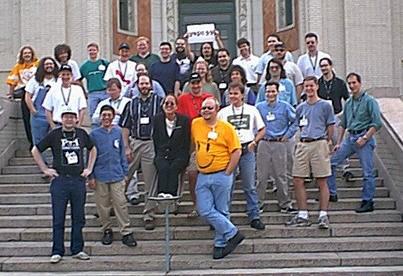 Though the formal conference ended at 5:00 each day, that didn’t mean the fun had to end. Perl Mongers know how to go out and have a great time, and that is just what they did—every night. I honestly think that some of the best ideas in Perl have come when you start mixing alcohol and Perl!

Kevin managed to feed all 300 of us dinner on Thursday night and on Friday a group of Perl Mongers and a few people from VA Linux Systems got together and had dinner. The dinner was great, the conversation was better. It was a nice contrast to have not only people who knew Perl, but others who were intimately involved with Linux, another Open Source entity. VA Linux Systems were kind enough to pick up the tab for dinner too, thanks guys! 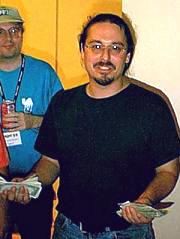 By the end of the conference, Kevin found out that they had gone a little over the budget. Word quickly spread and people immediately started a collection. Within 10 minutes Kevin had $1000 in his hands and VA Linux Systems offered to pay any extra overruns. The Perl community amazes me by showing how quickly they can get things done. People never once whined about the overrun, they just immediately took it upon themselves to remedy the situation. This is exactly why Open Source works so well.

Sure, there is going to be “Yet Another” YAPC next year, but there is no way that YAPC will ever be the same. This year, it was a gathering for those who truly love Perl. Word will spread and many others will come—which is great and we encourage it, but the true family of YAPC was there this year. I can see it now, in 20 years people will be claiming that they were at YAPC 99, just like all those who claim they were at Woodstock.

Kevin, you did an outstanding job this year with YAPC! You should be very proud because you organized something that will be talked about for a long time now. Thank you Kevin!

And for all of those who doubted that a good conference could cost a measly $60, see you next year!